A city daily has celebrated after its eight-year campaign succeeded in changing the law on organ donation.

The Glasgow Evening Times launched its Opt for Life campaign in 2011 to press the Scottish government to introduce an opt-out system, whereby people are assumed to be donors unless they have registered an objection.

At present, people must register to donate their organs for transplants after they die.

But MSPs backed the change in a vote last week, prompting the Evening Times to splash on the news the following day. 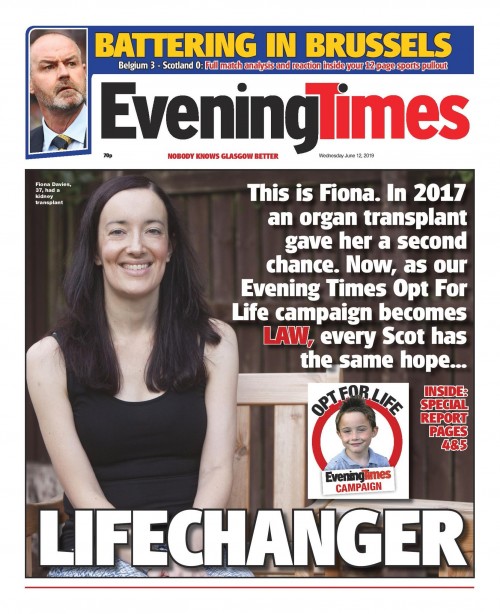 Senior reporter for for health Caroline Wilson, who led the campaign, told HTFP: ““After years of campaigning by the Evening Times, I’m absolutely delighted that our goal to introduce a new transplant system in Scotland has been been achieved.

“It is hoped that the change will not only increase the number of organs available for transplant –(evidence shows it has achieved this in Wales) – but also, crucially, help normalise the act of organ donation. It is right though, that the views of those who don’t wish to donate are respected and under any system it is absolutely crucial that family are aware of wishes.

“Leading the Opt for Life campaign since 2011 has been the most rewarding and challenging task in my journalistic career, to date. We weren’t simply raising awareness about organ donation or attempting to drive up numbers on the donor register, we were asking the government to consider a new system of organ donation. A change that was considered quite controversial and still is.

We knew it wasn’t going to be an easy campaign and it wasn’t. Being grilled by MSPs at the Public Petitions Committee and was one of the most daunting things I’ve ever been asked to do. We faced opposition, including from those medical profession and religious groups. However, the one constant was the level of public support, particularly those who had experienced the agony of waiting for a transplant.”

Henry Ainslie, deputy editor at the Evening Times, said: “Caroline, former editor Tony Carlin, and all those who worked tirelessly on the campaign to help bring opt out organ donation into law have done Scotland a tremendous service.

“This legislation will undoubtedly save lives, and how it came about is a prime example of how journalism still has the power to enact real and lasting change that makes a difference to everybody.”