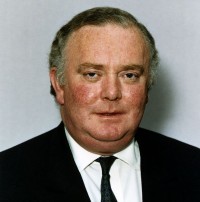 Local newspapers were complicit in covering up alleged historic child sex abuse by an MP, it has been claimed.

The Independent Inquiry into Child Sexual Abuse has heard allegations that three papers in the Chester area knew that Sir Peter Morrison, left, had been arrested after being found in a toilet at Crewe railway station with a 15-year-old boy – but subsequently published nothing about the incident.

The titles named at the inquiry were North Wales and Chester daily The Leader, local weekly the Chester Chronicle and the now-defunct Cheshire Observer.

Grahame Nicholls, a delegate to the Chester Constituency Labour Party from the National Union of Public Employees, told the inquiry there were rumours going around Chester that the MP “liked little boys”.

Mr Nicholls said: “The press certainly knew. The chief reporter on one of the newspapers that I was very friendly with, she would talk about it all the time, you know. So the press knew, certainly, and I knew, as I said, lots of them, and I couldn’t understand how anybody at a political level didn’t know, I just find that incredible.”

Asked how he had heard about the alleged incident in Crewe, which Mr Nicholls recalled as taking place some time between 1988 and 1990, he added: “There was a rumour going around – I say these are rumours, because that’s all they were, that something had happened in the toilets at Crewe railway station involving Peter Morrison and a 15-year-old boy.

“I read other areas where it says it was on the train, but, whatever, I mean, what I heard,  it was in the toilets – and that came from the Cheshire Observer newspaper’s reporter, that it was the toilets at Crewe.”

Mr Nicholls was quizzed on whether he thought there had been an “agreement” between the local Labour and Conservative parties at the time regarding how they would treat the alleged incident.

He replied: “My understanding was that we would – sorry, that Peter Morrison would not be standing in the 1992 election. The agreement was that if he wasn’t standing then we wouldn’t break cover on this particular story.”

Asked what he meant by “break cover”, Mr Nicholls added: “Release all the information that we had of what happened at Crewe hopefully into the local media. The local media wasn’t at that time – it wasn’t going to go along – didn’t want that published, because there was a very strong relationship between the – particularly the main newspaper and the Conservative Party.”

The Inquiry also heard this week from Jane Lee, secretary of the Labour Party’s Gresford and Rossett branch in 1989 and 1990, who said a Labour-supporting journalist at North Wales and Chester daily The Leader had attended a meeting of the branch and had told members about the alleged Crewe Station incident, adding it would “all be in the paper” the next morning.

However, no such story appeared in The Leader and, speaking at the inquiry, Ms Lee recalled the reporter’s response when she was subsequently asked why.

“She said the Chief Constable of Cheshire got a phone call from the Prime Minister’s office – Margaret Thatcher’s name wasn’t mentioned, but it was ‘from the Prime Minister’s office’ and had been persuaded to not press charges but to give a warning, an official warning, and, well, we said ‘Well, why didn’t that go in the paper?’, and she said – and I don’t know if it’s true or not, but she said ‘You can’t report warnings. You can’t put warnings in the paper.'”

Ms Lee added: “He was going to be given an official warning and it couldn’t be reported in the press. And that, in return, Morrison wouldn’t stand at the next General Election. That was the deal. ”

Christine Russell, who was an agent for the Labour Party between 1986 and 1992 and later served as Chester’s MP between 1997 and 2010, told the inquiry that “every reporter on the local press knew of these allegations”.

Specifically referring to the Observer, The Leader and the Chronicle, she added: “It’s certainly true that all the journalists on the three local papers were fully aware of various allegations, the Crewe allegations.”

So far, no journalists working for any of the three papers at the time have themselves been invited to give evidence at the inquiry.

Although neither The Leader nor the Chronicle were run by their current owners, Newsquest and Reach plc respectively, at the time of the alleged incident, HTFP approached both companies for comment on the claims.

Both declined to comment, but Reach-owned website Cheshire Live – the online arm of the Chronicle – itself reported the cover-up allegations in a piece published on Tuesday while Newsquest’s Chester Standard has also covered the story.