A chief reporter who exposed a psychiatric fraud has been honoured for his investigation in the city he serves.

Phil Coleman, chief reporter of the Carlisle News & Star, was handed a special award at the 2019 Carlisle Living Awards for his work in unearthing the fact practising psychiatrist Zholia Alemi had never qualified as a doctor.

The revelation that she had duped authorities into thinking she was a properly qualified medic led to the General Medical Council checking the records of thousands of doctors working in the UK.

Phil, pictured below with his award, was subsequently highly commended for his work at the Regional Press Awards, and was also shortlisted for the Private Eye Paul Foot Award for investigative journalism. 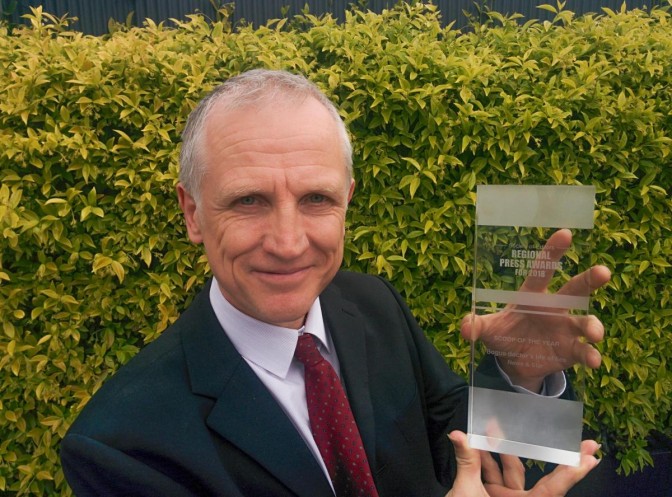 He received his special award at a ceremony held earlier this month.

Co-host David McNeill told the audience: “With more than 25 years experience as a print journalist this person still loves the job.

“He has a prolific talent with a moral compass and unerring curiosity. He is the winner of national and regional awards for work including investigations sparked by ordinary people in need of help, local politics, court cases and many, many exclusives.

“He was also the only regional newspaper journalist to make the shortlist for the Private Eye Paul Foot Award 2019 for investigative journalism.

“This quiet and unassuming man gets to the heart of stories while always retaining his integrity and reputation.”

Phil told HTFP: “I am thrilled to have won this award. It is an accolade from the community where I have worked for the last 25 years, and for that reason incredibly satisfying – proof that in these challenging times journalism is still valued.

“I love my job, and have always believed that journalism, when done properly, is a force for good, and vital to democracy. I have been particularly fortunate to work with many colleagues who share that view – including my current editor Chris Story and his deputy Emily Parsons.

“Finally, credit should go to the wonderful people at Carlisle Living, who organised a superb awards event, showing just how successfully local magazines can be embedded in their community.”