A regional daily turned to the comics for front page inspiration after a superhero’s namesake tackled an armed robber on its patch.

The Hartlepool Mail ran a Batman-themed splash yesterday after have-a-go hero Cameron Battman was awarded £250 by a judge for his community-spirited actions.

He had seen Walton riding away from the scene on a bicycle, and confronted him after the axe that the robber had used to threaten a shop assistant fell out of his coat. 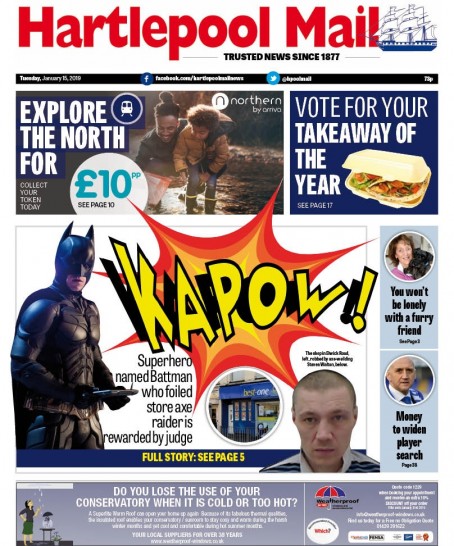 Mr Battman, 25, told the Mail: “As he approached me the axe dropped out of his coat and the carrier bag split on the floor. He picked the axe up and I thought he was going to attack me.

“I didn’t realise he had just robbed a shop. I disarmed him and kicked the axe away and held him on the floor.

“I spoke to the police and they said ‘can you keep hold of him’. They were only around the corner on their way to the shop he had just robbed. It’s not every day you get caught by Batman is it?”

Teesside Crown Court heard that, when asked by officers for his name, Mr Battman said: “It’s Batman – but with two Ts and it’s Cameron Battman.”

Jolyon Perks, prosecuting, told the court Walton had confronted the shop assistant while brandishing the axe, and emptied £78.44 from the till into a carrier bag, and also took four pouches of tobacco worth £42.80.

The assistant had been speaking to her 11 year-old daughter on her mobile phone when the robbery was in progress, and the child had heard part of the incident, but she had refused to hand over the device when Walton ordered her to do so.

Stephen Constantine, defending, said that Walton had little recollection of the robbery because he had taken Diazepam for sleeping difficulties.

Judge Peter Armstrong awarded Mr Battman with £250 out of public funds “for his bravery and public spiritedness in apprehending the defendant”.

Walton, of Furness Street, Hartlepool, admitted robbery and was jailed for 40 months.

It is not the first time a regional newspaper has managed to speak to a real-life superhero.

In 2016 HTFP reported how Ellis Lane, a reporter at The Citizen, in Gloucester, landed an exclusive interview with a man dressed as Superman who tackled an alleged mugger outside the newspaper’s offices.