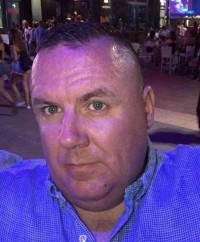 A bar owner has appeared in court accused of threatening to shoot a regional daily journalist over a story the paper was planning to run.

Paul Weeks, 45, is accused of causing a menacing message to be sent to a reporter working for the Grimsby Telegraph and its Grimsby Live sister website.

According to a report in Grimsby Live, the incident is said to have happened while the reporter was working on a story about the Chambers bar, in Grimsby.

Weeks, pictured, is alleged to have told the journalist during a telephone conversation: “If you run the story, I’ll find you and shoot you.”

Weeks, pictured, is described as a “high profile figure” in Grimsby and is known for running a number of different pubs, clubs and restaurants in the town and neighbouring Cleethorpes.

He denies causing the telephone call to be made on 28 August last year.

The case was adjourned until 13 May for legal discussions about a suggested amendment to the charge to say that it was Weeks who made the telephone call, rather than causing it to be made.

Weeks was represented by solicitor Richard Hackfath and was allowed unconditional bail. He was excused from attending the next hearing.