The Teesside Gazette ran the wrap to mark a century-and-a-half since its first edition, published on 8 November 1869.

The art which adorns today’s Gazette was created especially for the occasion by Mackenzie Thorpe, a former delivery boy for the paper, entitled ‘Hot off the Press.’

It depicts several figures, including one reading a copy of the Gazette and another wearing a scarf in the red and white colours of local football club Middlesbrough FC. 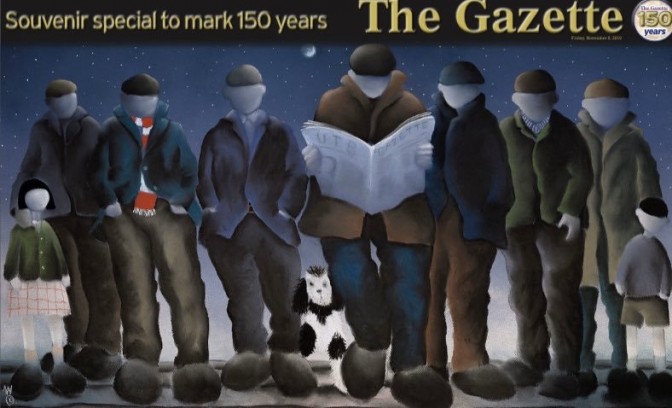 Mr Thorp told the newspaper: “It seems to me the Gazette is exactly what a local paper should be – a constant, a part of a community sharing and reporting all the ups and downs of an area and the people who live there.

“The Evening Gazette (as I always knew it as a child) has been a permanent fixture in my life, as much a symbol and embodiment of our community as the Transporter Bridge itself. I am not unique, my memories will be others’ memories too.”

“During my career as an artist, the Gazette has championed me, a local lad who is proud to represent the town and area as best he can, and I am forever grateful for this support, so it is a real honour to have been asked to create a piece of work to help mark and celebrate the Teesside Gazette’s 150th Birthday.”

At the time of its launch, the Daily Gazette (for Middlesbrough, Stockton and District), as it was then known. was the first halfpenny evening newspaper in Britain.

Posting about the special edition on Twitter, HTFP blogger and former Gazette editor Steve Dyson wrote: “Wow … this looks wonderful. Huge congratulations to everyone [at the Gazette] on your 150th anniversary.

“My time at the paper from 2002-05 was short but the very best experience in my career.”

Middlesbrough FC chairman Steve Gibson and head coach Jonathan Woodgate shared their memories of growing up with the Gazette for the Gazette, as did club legends Tony Mowbray and Stewart Downing.

Mr Woodgate said: “The Gazette has been a massive, massive part of football in this area. We all grew up reading it didn’t we? I still do, I read it every day. I like to read the views and opinions, positive and negative, I like that.”

The supplement, compiled by the Gazette’s Dave Robson, includes a tribute to the founder Hugh Gilzean Reid from his great-grand-daughter alongside pieces on how the paper has been put together across the decades.

It includes a tale of how a belt from a steam roller was used to keep the presses rolling in 1890 after an explosion at the gas works cut the power supply.

Matt McKenzie, Reach plc editor and regional head of print for the North East, said: “We’re proud to have served Teesside for 150 years, fighting for our readers all the way.

“As we pulled together our anniversary edition, it’s been really touching to see how much love people have for The Gazette and how we’re a huge part of their lives.”