A regional journalist suffering from “work-related stress” has been banned from driving after being caught more than four times the drink-drive limit.

Beth Elen Hughes, a reporter with North Wales daily The Leader, has been spared jail after a judge heard glowing references in her favour and how she had thrown herself into work for the community.

According to a report of her case carried in her own newspaper, North East Wales Magistrates Court heard the Cardiff University journalism graduate had “overstretched herself” with her job as well as her studies and engaging in charity work.

The court, pictured, in Mold, was told that the 24-year-old, who admitted drink-driving, had asked to go home because she was suffering from stress after an incident at work on Monday 3 December. 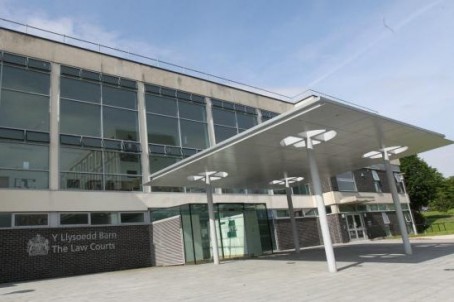 Rhian Jackson, prosecuting, said she was later spotted by an officer driving a Toyota Yaris at a very slow speed through the village of Sychdyn, and she was later pulled over on the edge of nearby Northop.

After the officer noticed a smell of alcohol, Hughes said: “You’re going to charge me aren’t you?”

She was arrested and taken to St Asaph police station, where a breath test conducted showed she had consumed 146mg of alcohol in 100ml of breath – more than four times the legal limit of 35.

Probation officer Andrew Connah told the court Hughes accepted responsibility for her drink-driving and was “under a great deal of stress due to employment and taking an MA course as well as suffering from the bereavement of a grandparent”.

Mr Connah said that her employer had been “extremely supportive” although her role was at risk.

He told the court he had also received a letter from Hughes’ social worker about her mental health, including anorexia and other issues, adding she had been prescribed anti-depressants.

Mr Connah said: “She is genuinely remorseful and understands the consequences of her drinking

“She says she doesn’t have an issue with alcohol and says she self-medicated due to her low mood and depression, but normally doesn’t drink to excess.”

Phil Lloyd Jones, defending, told the court: “When I first met Ms Hughes she was clearly in a low mood, depressed and ashamed, but I told her to speak to her colleagues and the court has heard the quality of the references they have given her.

“She is a lady with a university degree, a masters degrees and I get the impression she has been doing far too much. There has been a lot of charitable work and singing and this has taken its toll.

“In the last 12 months she has taken time off work. She hit the wall and asked to go home (from work). She drank and thankfully there were no serious consequences apart from the reading being extremely high.”

District Judge Gwyn Jones admitted custody had been an option for him, but he doubted what it would achieve in the long run.

Sentencing Hughes, he said: “I’ve had time to consider in some detail the quality references that have been put before this court that speak of your good work in the community as well as the medical evidence of your social worker at the Primary Care Mental Health Team.

“You have significant ability and you have allowed your enthusiasm to get the better of you and you have overstretched your physical and mental abilities.”

He told her to complete 150 hours of unpaid work as part of a 12-month community sentence and banned her from the road for three years, but added she could take the drink-drive rehabilitation course which would qualify her for a 25 per reduction in her ban.