Rugby fans have taken out a full page advertisement in a regional daily to call for two players acquitted of rape to be reinstated by their club.

Supporters of Ulster Rugby took out the advert in the Belfast Telegraph to urge the club to bring back Paddy Jackson and Stuart Olding to the squad following the conclusion of their trial last month.

The full-page advert, funded by more than 100 supporters, described “the social media backlash” against the men as “cyber prosecution”.

It follows an advert crowdfunded by 139 members of the public, and printed last week in the Bel Tel, calling for the players to be sacked. 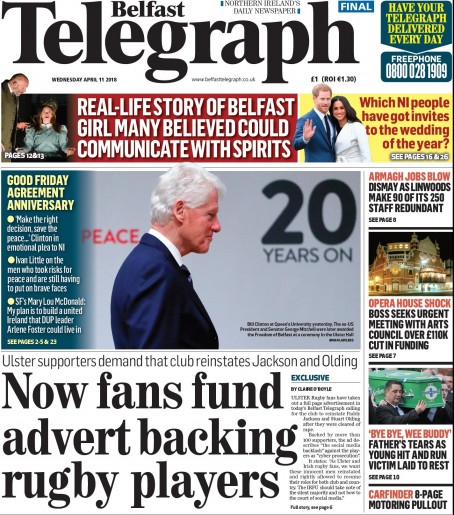 The original ad had described the content of lurid messages sent by the players on the Whatsapp messaging service, which formed part of the evidence in the trial at Belfast Crown Court, as “reprehensible”.

But the new advert, addressed to the leadership of the Irish Rugby Football Union and Ulster Rugby, said: “What is reprehensible is the extent of the social media backlash aimed at incriminating men unanimously acquitted of any crime. We are fed up with this cyber persecution.

“As Ulster and Irish rugby fans, we want these innocent men reinstated and rightly allowed to resume their roles for both club and country. The IRFU should take note of the silent majority and not bow to the court of social media.

“We do not expect an answer to this letter, but we do expect them to play. Yours, Real fans standing up for the Ulster men.”

It publication provided a splash for the Bel Tel on Wednesday.

A jury of eight men and three women deliberated for less than four hours before fining Mr Jackson, 26, and Mr Olding, 25, not guilty of rape.

Mr Jackson was cleared of a further charge of sexual assault, while Two other men, Blane McIlroy, 26, and Rory Harrison, 25, were also cleared of charges against them linked to the same incident in June 2016.

Mr Jackson and Mr Olding are currently subject to an internal review by the IRFU and Ulster Rugby to decide whether or not they should be allowed to play for the teams again.

One of the men behind today’s advertisement, an unnamed 35-year-old Belfast-based business owner, told the Bel Tel: “It’s not that I or anyone else thinks the messages they sent were not a big deal.

“But the fact is I can’t imagine there’s a person anywhere in Northern Ireland who wouldn’t be appalled at the thought of their private messages and correspondence being picked through in public. We’ve all offended someone at some point.

“These men have been upfront, they’ve said sorry for what they said and to continue to protest so viciously after people have apologised just isn’t right in my view.”

The advert which provoked the response, organised by 34-year-old Belfast native Anna Nolan, who now lives in Glasgow, said the players’ behaviour “falls far beneath the standards that your organisations represent and as such we demand that neither of these men represents Ulster or Ireland now or at any point in the future.”