A removal man has been accused of trying to blackmail a restaurant by threatening to send footage of its “unkempt state” to a regional daily newspaper.

The Worcester News has been caught up in the alleged blackmail attempt by a man using the name ‘Jim Janes’, who had posted the footage of a cellar at Worcester restaurant Grill and Flames on Facebook.

Speaking to the News, Grill and Flames chef and manager Pramod Tirunagri claimed Mr Janes threatened to pass the same footage on to the newspaper unless he was given £1,000

Mr Janes denied the claim, but the paper’s editor, Michael Purton, revealed that someone claiming to be Mr Janes had phoned to offer them the footage in exchange for free advertisements for a year. 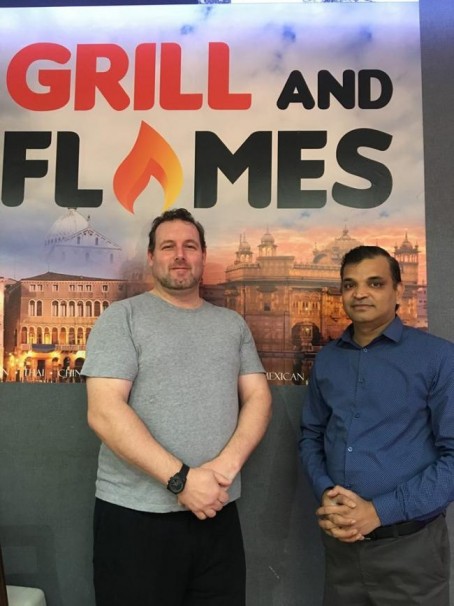 Neil Stroud and Pramod Tirunagri, managers of Grill and Flames

The News declined the caller’s offer, and in an editorial comment, Michael described the situation as “simply astonishing”.

He wrote: “If we are to believe the bosses there, they hired a removals man called Jim Janes to clear out the cellar but he then decided to film the space in its unkempt state and post the video on Facebook, before contacting them to demand £1,000 to remove the video and prevent him bringing the footage to the Worcester News.

“This alleged blackmail attempt, if true, is dumbfounding in its lack of sophistication. Firstly, the video had already been posted on Facebook and seen by thousands of people so the damage was already done.

“Secondly, Mr Janes posted the video from his own Facebook account and made no attempt to hide his identity – despite blackmail being a criminal offence.

“Thirdly, someone claiming to be the same Jim Janes phoned the Worcester News yesterday morning to say he’d send us the video if we gave him free adverts for a year. We politely declined.

“For Grill and Flames, their reputation has taken an unfair hit – even though they received a 4-out-of-5 food hygiene rating in March.”

Approached by the News about the claims, Mr Janes told the paper: “That is not true at all. They rang me and they offered me £1,000.”

The restaurant’s owner Limon Rahman has told the News he is unsure whether to complain to police about the matter due to “potential retaliation”.

An environmental health officer from Worcestershire Regulatory Service is shortly due to conduct an inspection of Grill and Flames.