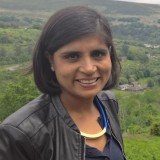 The editor of a regional news website has denied being “an enemy of the Welsh language” after criticism over a comment piece.

Wales Online editor Paul Rowland apologised for any offence caused to those who misinterpreted the piece, which was written by Channel 4 News producer Oruj Defoite.

In her article for the Cardiff-based site, Indian-born Oruj discussed her upbringing in Merthyr Tydfil and Ebbw Vale, adding she now feels she is “judged as being less qualified to call myself Welsh for not speaking the language”.

Oruj, picture, added she felt some had also seen her skin colour as disqualifying her from “Welshness”.

The piece, which was published last month, received criticism online, with Paul responding on Twitter to a number of readers who felt there had been an insinuation that Welsh people, particularly Welsh speakers, were racist.

In an editorial published afterwards, Paul wrote: “Let me take this opportunity to apologise to anyone who drew that conclusion from the piece. I can say with my hand on my heart that interpretation did not occur at any stage when I read it.

“If, as a result, people want to call me a bad editor, or a lousy journalist, then I can live with their opinions. What I am absolutely not is an enemy or opponent of the Welsh language.

“When Oruj first contacted us to pitch her piece, it appealed to me most significantly because it was from a perspective that I was aware I hadn’t read a great deal about: the experience of a person of colour, and a woman in particular, in a part of Wales with one of the lowest levels of immigration in the country.”

He added: “Of course, I wasn’t so naive to not suspect it would be controversial. But if I’d read it as a smear of racism against Welsh speakers everywhere, I would never have published it.

“If I’d thought it as divisive as many fear, it would never have gone out. Believe or disbelieve that as you wish, but it’s the truth.”

His editorial went on to highlight a number of positive stories run by Wales Online about the language.