A regional daily has launched a petition to curb the sale of “zombie-style” knives after a wave of fatal stabbings on its patch.

Eight people have so far been stabbed to death in the West Midlands this year and Wolverhampton daily the Express & Star says it is time for politicians to act.

It has launched a petition to Home Secretary Sajid Javid, who is also a West Midlands MP, to review legislation around the sales of knives, swords, machetes and other weapons.

The paper says it was able to buy the ‘long-reach’ machete with a 17-inch blade and a serrated edge pictured below for just £13.90 from a city-centre shop. 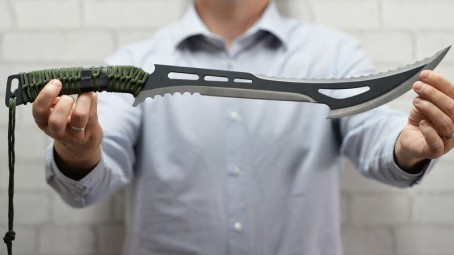 It said in an editorial: “The country is in the grip of an unprecedented violent crime epidemic and yet it remains simple – and legal – to buy brutal weapons from high street shops.

“Such blades are responsible for the deaths of countless loved ones across the country and are regularly seized by police, yet remain freely available to buy on UK streets.”

E&S editor Keith Harrison added: “We were appalled that these horrific weapons could be bought over the counter, particularly at a time of rising knife crime in the Black Country.

“We’ve previously campaigned successfully to get the sale of so-called zombie knives banned, but the makers have been exploiting a legal loop-hole to sell weapons that are almost identical.

“At the time of writing, more than 3,000 people have backed our petition to Sajid Javid and we will continue to do whatever we can to make our streets safer.

“This is a national issue and we are grateful for any support people can offer.”

The petition was launched on Thursday with an initial target of 2,500 signatgures and had attracted 3,233 by this morning.