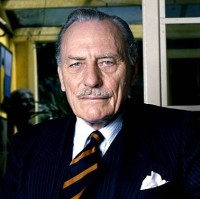 A regional daily’s online poll on whether Enoch Powell should have a blue plaque erected has closed with 70pc of readers giving the idea their backing.

But Wolverhampton daily the Express & Star, which staged the vote over the course of last week, says it has “no plans” to join the campaign to honour the controversial politician, pictured left.

The E&S poll followed a public meeting held by the paper last month to mark 50 years since Mr Powell’s infamous ‘Rivers of Blood’ speech warning of the dangers of mass immigration.

By the time it closed on Sunday more than 20,000 readers had had their say – with 70pc backing the blue plaque proposal.

Wolverhampton Civic and Historical Society has confirmed it has received an application for a plaque for Powell, who was a Tory MP in the city for 24 years.

Among its backers is former Birmingham Post editor Nigel Hastilow, who described Mr Powell in a recent article as “one of the towering figures of the 20th century.”

“Enoch Powell fought to maintain our freedoms.  Would anyone seriously deny such a significant politician a little blue plaque marking his links to Wolverhampton?,” he wrote.

However the city’s three Labour MPs and the local bishop have all declared their opposition to a plaque on the grounds that it would be tantamount to “honouring his racist views.”

Despite the overwhelming public vote in favour of the plaque proposal, E&S editor Keith Harrison made clear the paper is staying above the fray.

He told HTFP: “Our aim with the poll was to ascertain a snapshot of public opinion and, as ever, report the results in an accurate, balanced and fair way.

“The scale of the response shows that, 50 years on, the Rivers of Blood speech still sparks strong feelings across the political spectrum.

“We have no plans to campaign for or against the plaque proposal.”