As part of the game, Jo and Simon were charged with correctly identifying the actual journalist from a choice of three callers after quizzing them about their work.

Craig’s fellow callers were ‘Becky from Darlington’, who falsely claimed to work for the Northern Echo, and ‘Valerie from just outside Swindon’, who masqueraded as the editor of the Wiltshire & Gloucestershire Standard. 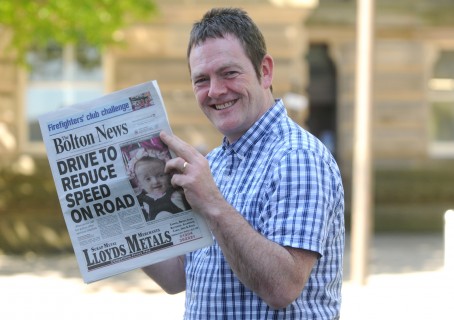 After ‘Becky’ and ‘Valerie’ were challenged on stories they had worked on recently, Craig was introduced as ‘Craig from Bolton’.

When asked about his work, he told the pair about what his role entails, and explained the News’s splash that day had been about calls to reduce speed limits on a road on his patch.

After hearing from Craig, Jo said: “My mind is made up already. Totally. I know exactly who it is.”

Simon went for Valerie, but Jo said “Craig just has that voice like somebody who works in newspapers.”

Simon responded: “What tired and exhausted?”

In a piece about his experience on air, Craig wrote: “We celebrate Local Newspaper Week every year by highlighting how important local papers are to the communities they serve.

“We pride ourselves on representing the ‘little man’ and taking those in power to task over the decisions they make and how they affect our communities.

“According to 2018 YouGov survey, local newspapers in print and digital are read by 42 million adults and are the most trusted source for local news and information.

“The Bolton News has a proud history of campaigning on behalf of our readers and reporting on the news that local people really care about – ever since our first edition in March 1867.”