A website which tells the first-hand story of the early days of journalism training in the UK has just notched up its 100,000th visit.

Gerry Kreibich, a former editor of the Matlock Mercury who went on to lead the journalism course at Richmond College, Sheffield, set up his site ‘Memoirs of a Pioneer Journalism Lecturer‘ 11 years ago.

It looks back at the early days of the Richmond course which launched the careers of hundreds of journalists before later being transferred to Sheffield College.

Many of initial batch of trainees are now around retirement age, but the site still gets around 20 visits a day. 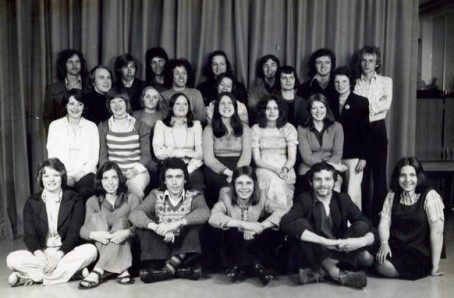 A year-group of students from the early days of Richmond College, Sheffield.

Said Gerry: “I often wonder who all the current visitors are, but I’m thrilled by the continuing interest – and especially happy about the way in which the site has kept me in contact with so many of the youngsters who sat at those desks learning the basics of the job in the 1970s and 80s.”

“I saw that everything was changing completely – newspapers, the training scene, the lot, and I thought I’d better record for posterity how things used to be. And I am glad I did, because my website seems to have become the only detailed record of how day-to-day journalism training was conducted. It’s a chunk of real history.”

“There have naturally been retirements and shifts into other media-related fields, but many of the trainees of that time are still in top newspaper, magazine and broadcasting  posts in the UK and overseas, nationally and locally.  I still get e-mails from former students all over the place.

“It sounds corny, I know, but there’s a real family feel among all the ex-Richmond lot. They are the products of an age when there were only six journalism colleges in Britain, and realistic NCTJ research about likely regional recruitment figures meant that everyone could be guaranteed a job as a reporter when the course finished.”

Now 84, Gerry still does the odd freelance job and plays piano in a jazz club.

As well as the website, he also produced a booklet about his lecturing days entitled ‘Far off Days at Richmond College’ which raised money for a Ghanaian charity working with lepers, orphans and street children.