A newsagent used a regional daily poster board to announce his retirement – 30 years after being admonished by the newspaper’s then-editor for announcing his children’s births via the same method.

Dick Smith has sold the Oxford Mail for 38 years from his paper shop in the village of Cumnor, but has now retired at the age of 66.

He announced his departure in “signature fashion”, using an Oxford Mail poster board – despite getting into trouble with the paper for doing the same thing to announce the birth of his children 30 years ago.

The “local legend” has also been known to give his take on the day’s headlines in the same way over the years. 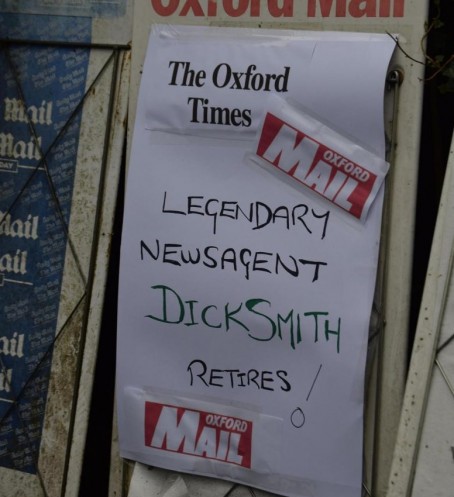 Speaking about his run-ins with newspaper bosses after his son Peter was born, Mr Smith told the Mail: “Everyone in the village knew [wife] Angie was expecting any day and when she gave birth it seemed the best way to tell everyone.

“We got a note from the editor saying we are not allowed to do that so we did it again when [daughter] Sally was born three years later.”

After his last day of trading last month, customers held an impromptu send-off, forming a guard of honour while brandishing rolled up newspapers.

Mr Smith, who is originally from Liverpool, added: “I had a lot of people come in in the last few days to say they couldn’t believe we were going.

“But life goes on and I’m looking forward to spending time with my granddaughter and in the allotment.”