A journalism thinktank has predicted that a “new wave of technological disruption” will soon hit the industry – including artificial intelligence devices writing stories.

Speaking at a gathering of digital journalism leaders in Wolverhampton yesterday, the Reuters Institute’s Nic Newman said smart speakers would become “a medium in their own right” while emerging AI programmes could see devices capable of turning data into readable journalism.

He also predicted a shift in business model from advertising-funded platforms to reader payment, citing a survey in which 62pc of publishers said advertising would become a less important source of funding.

The one-day conference was organised by Behind Local News, a platform recently set up by leading publishers to showcase good work in the regional press and highlight current digital developments in local newsrooms. 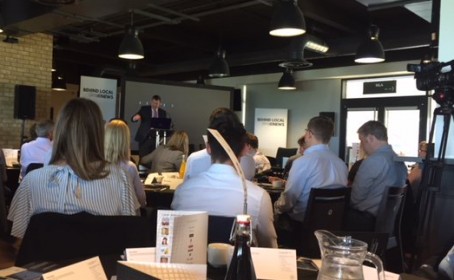 Delegates at the Behind Local News conference in Wolverhampton

Sessions focused mainly on practical issues such as using metrics to analyse what readers want, making data journalism work in your newsroom, and making the most of Twitter.

But it was the after-lunch session entitled ‘The Future of News’ which provided perhaps the most telling glimpse into what the potential news landscape may look like in 5-10 years.

Posing the question ‘What comes after the smartphone?’ Nic said: “A new wave of technical disruption is coming along.”

He said news would become both more visual and more oral, with voice-activated speakers such as Alexa playing a key role.

“Voice activated speakers are hitting the mainstream now.  There will be a lot more people talking to computers, it is going to be a medium in its own right,” he said.

“It’s pretty clear that the next wave of technological innnovation is going to centre around artificial intelligence.”

Nick cited emerging platforms such as Dreamwriter, an AI prorgramme that collates information and data and turns it into journalism, and Replika, an “AI friend” which will “serve up things it knows you are intrerested in.”

He concluded: “The publishing landscape will continue to get more complex and more competitive, the business model will shift from ad-driven one to one more based on relationships and trust, content will become more visual and more oral, and AI opens up possibility if automated production and distribution.”

Focusing on the issue of reader engagement, she revealed that 45pc of users who land on a piece of content do not actually read it.

In a subsequent session some editors and digital exectives shared ideas on how they were tackling the issue.

Anna Jeys, executive editor at Birmingham Live, revealed that live-blogging court cases, for instance, resulted in a sixfold increase in reader engagement compared to a single court report, while Andy Martin, editor of the Bournemouth Echo, described how he had used improved business coverage to boost reader engagement.