Journalists to vote on industrial action at daily and Sunday titles 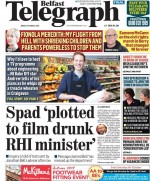 Journalists at a city daily and its sister Sunday title are to hold a ballot on industrial action as a long-running pay dispute looks set to escalate.

National Union of Journalists members at the Belfast Telegraph and Sunday Life are to hold the vote after two years of pay talks and attempts to secure a new collective agreement reached an apparent impasse.

The union says the ballot for action was been prompted by a “derisory” 1pc offer from Dublin-based Independent News and Media, which owns the two titles.

The NUJ had previously lodged a 5pc pay claim, backdated to June 2018 and covering all employees of the two titles along with freelance journalists writing for them.

According to the union, NUJ members at the two papers have only received a 1pc pay increase in the past 10 years, while the collective agreement between the union and the company has not been renewed since 2003.

Ian McGuinness, NUJ Irish organiser, said: “For nearly two years we have been trying to get the company to engage in a constructive and meaningful way. It has procrastinated, delayed and frustrated the talks process.

“In a last ditch attempt to try to talk sense into the company on these matters, the NUJ referred the dispute to the Labour Relations Agency for collective conciliation. Unfortunately, because of the company’s stance, that attempt has so far failed.

“Our members held a chapel meeting on Friday and they are frustrated and angry by the lack of progress. They see no alternative but to ask the union to start a ballot for industrial action, including strike action, to get their message across.

He added: “The message to the company is simple – Belfast Telegraph and Sunday Life journalists deserve a pay rise and they should be paid extra when they take on a more senior role.

“It is not too late for INM to recognise the contribution of their workers to the success of the titles and reward them fairly for their work. The NUJ remains willing to engage in further talks at any stage to resolve this escalating dispute.”