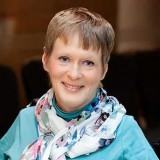 Journalists are set to raise hundreds of pounds in memory of a colleague who has died of cancer aged 56.

Tributes have been paid to Heather Clark, left, who spent 25 years working as a reporter on ITV’s Yorkshire-based Calendar news programme.

Heather, who was born with no limbs after her mother took the anti-morning sickness drug Thalidomide, died at the weekend after an 18-month battle with ovarian cancer.

So far, the team have raised more than £200 in sponsorship ahead of the race, which will take place in Wakefield on 17 June.

Christine told HTFP: “Heather has been an integral part of our team at Calendar for many years. She was such a fighter.

“Despite her disability, she refused to miss out on life in any way and in her final months turned that fighting spirit to campaigning so that no other woman would miss the signs of ovarian cancer.

“She really was remarkable and will be very missed by her friends and colleagues in the newsroom.”

Her funeral will be held at the Great Yorkshire Showground, in Harrogate, at 11.30am on 25 June.

Donations in her memory can be made to Ovacome, St Gemma’s Hospice and Cancer Research UK.