A journalist who spent almost half a century in the regional press industry has died aged 84.

Tributes have been paid to Bryan Tann who spent most of his 47-year career at the Lynn News, in King’s Lynn.

Bryan joined the then News & Advertiser as a trainee reporter aged 16 and went on to have three separate stints at the paper.

Colleagues remembered Bryan, who died on Tuesday, for his “invaluable fund of local knowledge” and attention to detail. 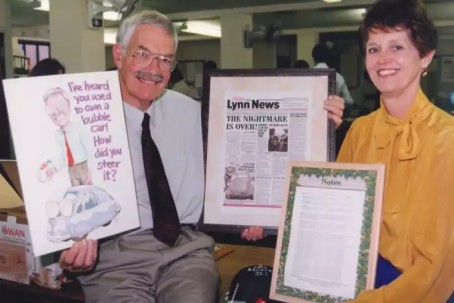 Bryan, left, with wife Cherry upon his retirement in 1998

He said: “He was a popular senior sub-editor with a huge and invaluable fund of local knowledge. Also notable were his vast experience, attention to detail and popularity among staff from all departments of the business.

Malcolm Powell, another former Lynn News editor, said: “He set a fine example to everyone, especially people entering the profession.

“Everyone called upon his encyclopaedic knowledge of local and national history. He had a dry sense of humour which we all appreciated.”

And former senior reporter Mike Last said: “I will remember Bryan as the ‘gentle giant’ of the workplace, who always had a friendly smile and sense of humour that quickly lifted spirits and made him a popular character in the newsroom.

“He was always happy to give advice to young reporters and seniors alike, explaining why changes or grammatical corrections were needed in stories, and he was an excellent sub-editor, with many years of experience. ”

After 11 years of reporting, Bryan joined the Wisbech Advertiser and Saturday Pictorial, later the Fenland Citizen, as a sub-editor, before returning to the News as a sub-editor in 1963.

He left again in 1971 to join a West Norfolk publishing business specialising in church magazines, but returned in 1973 and remained with the News until his retirement in 1998.

Bryan leaves his wife Cherry, a son, a stepdaughter, a stepson and two grandsons.

Cherry told the News: “His career at the Lynn News played a large part in his life and he really enjoyed working there. He made many good friends over the years.”