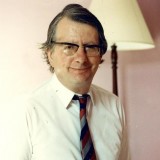 A journalist once sacked for “gross misconduct” after refusing to become a daily’s obituaries editor has died aged 77.

Tributes have been paid to Andrew Hood, left, who worked as letters editor at both Edinburgh-based daily The Scotsman and its Glasgow-based rival The Herald.

In the role at both newspapers Andrew was known for his “special skill in choosing offbeat or often controversial letters.”

Andrew, who died last week, was also described in his own obituary in The Herald as “a well-known and much-loved member” of Edinburgh’s gay community.

Originally hired as part of a graduate trainee scheme by The Scotsman, he rose to become its assistant editor after working as a sub-editor and chief leader writer.

But, according to The Herald, he was controversially sacked for “gross misconduct” in 1989 after refusing the then editor Magnus Linklater’s request that he become the paper’s obituaries editor – a job Andrew considered an “insulting” demotion.

The Herald states that at the time of his sacking, colleagues said there had long been an “animus” against him, some suggested because he was active in Edinburgh’s gay community.

After joining The Herald, Andrew continued to live in the Scottish capital, commuting to Glasgow every day.

Lillian McDowall, who worked with him at The Herald, said: “Andrew worked six days a week as letters editor to ensure the debates and themes were accurately and evenly attributed.

“This was his passion and he was uncompromising in his attention to detail. When his editor tried to make him take a holiday, his answer was always ‘yes, later.’

“He was a very loyal friend. When he finally retired at the age of 67, his years of experience and great knowledge was a huge loss, as evidenced by the number of letter writers – in addition to his colleagues – who congregated at his leaving party.

“He was deeply dismayed by politics of late and in particular the vote on the EU referendum, which he felt could only be utterly disastrous.”

Andrew is survived by a nephew and a niece.