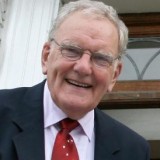 A weekly newspaper journalist has published his final piece after 58 years of writing about a football club.

Oliver Phillips has bid farewell to the Watford Observer after more than half a century of being associated with the newspaper.

Oliver, 77, retired to France in 2005 but has continued to write a regular piece for the Observer on Watford Football Club.

While full-time with the paper, where he served as assistant editor and sports editor, his biggest scoop involved him revealing Elton John was joining the club as vice-president.

Oliver, pictured, signed off in a farewell column for the Observer published last month.

He wrote: “For one born and bred in Watford, it was a wrench to go to France but I could not have afforded to live at a similar level in the locality on the pensions but, while financial reasons do have an impact, the fact is I had to get away.

“I know some journalists who left the Watford Observer and were successful, yet never took the job home. I always took the job home, always considered and often fretted over what I must do and write, even when walking the dogs of a weekend.

“Watford FC and subsequently the history and reflections of South West Herts itself, took over my life. If I had loitered nearby in retirement, I would have continued as a workaholic and would not be here today.”

Oliver added: “Since my retirement, I have enjoyed the freedom, yet also the discipline of writing weekly.

“Dependent how you viewed my contributions, all good or boring things come to an end and so my connection with the Watford Observer finishes after just over 50 years, and my writing on Watford FC wraps up after 58 years.

“I have enjoyed it, I hope some of you have and, if I have wittered on unprofessionally or repeated myself, I am sorry but at 77 I claim that as an old man’s prerogative or tendency.”

He concluded: “I reflect happily on an enjoyable 58 years in journalism. Thank you and farewell.”