An “invasion of the jellyfish” prompted a weekly newspaper to take cinematic inspiration for its front page.

The Folkestone & Hythe Express drew inspiration from horror film posters of the 1950s and 1960s after swimmers were warned about the dangers posed by a wave of jellyfish off the Kent coast.

The splash was designed by Dave Hobday, who works at Express owner the KM Group’s design hub.

The hub is responsible for dealing with around 10pc of all news pages found within KM Group and Iliffe Media paid-for titles. 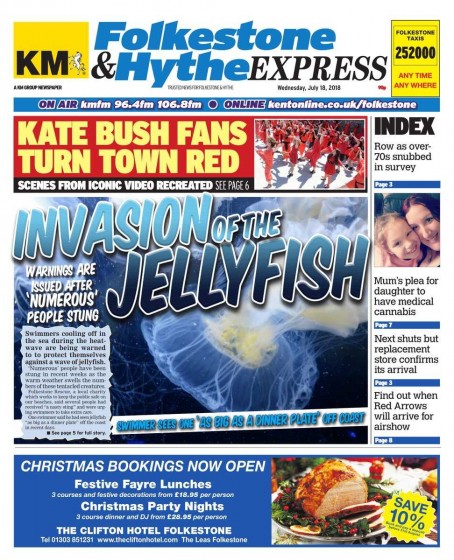 Dave told HTFP: “I’d originally been sent a 300-word lead with a pic but I remembered the old 50s-60s horror film posters such as Invasion of the Bodysnatchers and The Blob and thought I could do something really special – providing I could persuade the news editor to take back most of the words.

“Thankfully he loved my idea, so we could go big on the attention-grabbing headline and image.”

The five-strong team on the hub – three page designers and two graphic artists – create around 100 pages a week, plus graphics for print, the Kent Online website and TV station KMTV.

Group production editor Lisa Daniels added: “The eye-catching Invasion of the Jellyfish front page is a brilliant example of what the design hub can do for our titles and of the close working relationship we have with our newsdesks – who embrace our ideas and regularly provide great suggestions of their own.”