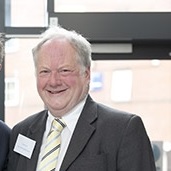 A former regional daily journalist describd as a “linchpin” of his union has been honoured by colleagues.

The National Union of Journalists has awarded life membership to Kevin Palmer after 46 years’ service.

Kevin, pictured, worked on a variety of regional papers including the Derby Evening Telegraph and now runs his own company, Kevin Palmer Media Services.

Between 1988 and 1993 he was on the reporting team at the pioneering Birmingham Daily News, a free newspaper delivered each morning to more than 200,000 homes.

Members of the NUJ’s Nottingham branch met at the Malt Shovel in Spondon, Derby – Kevin ‘s local pub – in tribute to him.

Said Chris: “I have known Kevin for decades and know just how much the NUJ means to him and especially how important it is to have his union milestone recognised for what it is: a truly inspiring record of dedication, integrity and solidarity to his fellow journalists.

“Kevin has been a linchpin of the union in the East Midlands for many years but I first knew of him when he worked in Birmingham for the mould-breaking Birmingham Daily News.

“While at the Daily News from 1988 to 1993, Kevin helped win the biggest pay rise known on the paper and then went on to become FoC.

“Latterly, Kevin has maintained his union responsibility which he takes very seriously. As branch chair he has kept the Derby and Burton membership together in the most difficult of times – something for which he deserves great credit.”