A former regional journalist has helped a Second World War airman recall his time as a prisoner of the Germans in a new book.

Geraint Thomas, who worked for the South Wales Evening Post and Wales Online, has edited A Raid Over Berlin, which tells of former RAF wireless operator John Martin’s wartime experience.

Mr Martin, now 96, survived a 1944 Lancaster bomber crash during a raid on the German capital which claimed the lives of four of his crewmates.

He was captured, interrogated and accused of being a spy – and has now told his story 74 years later. 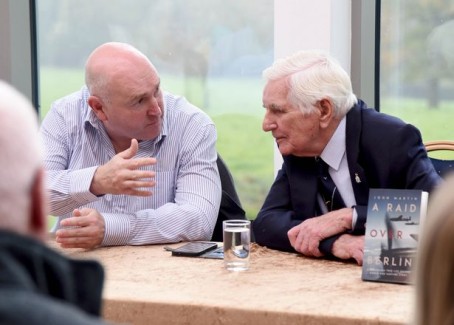 Geraint told Wales Online: “During my time as a journalist I interviewed many Second World War veterans and was always humbled by what they went through but John Martin’s story is perhaps the most astounding.

“His escape from the doomed Lancaster is truly one of the most miraculous on record – to this day he cannot explain it fully.

“It was a real privilege to work with John and all at Parthian [Books, the publisher] – with Second World War veterans in their 90s now their numbers grow fewer each year and there can’t be many new first-person stories to tell.”

Mr Martin himself said: “People had been telling me I should write my memoirs and I realised that I could remember a lot of details I might not have been expected to remember.

“I found it remarkably easy; I suppose it’s because it’s such a big thing in your life that you do remember it.

“I think it’s important that what we went through is recorded for prosperity; not so much about me, I don’t care what people think about me, but for all those who didn’t come back and all those who had to suffer in a prison camp.”