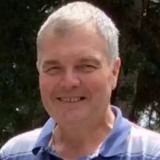 A former journalist has died after suffering from a rare form of cancer believed to have been brought on by exposure to asbestos in his youth.

Philip Round, left, has passed away aged 66 after a battle with mesothelioma.

His factory worker father Joseph died of a similar illness 26 years ago, and Philip’s widow Judith told the Yorkshire Post she believes exposure to fibres on his father’s overalls ultimately caused her husband’s death.

Philip emigrated to Canada in 2004 with Judith, and the couple had been Canadian citizens with dual nationality since 2009.

Judith told the Post: “Philip never worked with asbestos but his father did in the 1960s and Philip’s cancer was almost certainly caused by asbestos fibres brought into his childhood home on his father’s overalls.”

Born and brought up in Hebden Bridge, Philip joined the Halifax Evening Courier as a reporter in 1971.

From the mid-1980s he worked in media relations for the Post Office, the BBC and others, before moving to County Durham with the Tyne and Wear Development Corporation and then to the South of England, where he worked in turn for Portsmouth City Council, the Ordnance Survey and the Automobile Association.

He and Judith married in 1980, and both were prominent Liberal councillors in the 1970s and 1980s on Hebden Royd and Calderdale councils.

Philip served in Hebden Royd for 10 years, becoming the council’s youngest-ever chairman in 1976.

In 1983, Judith was deputy leader of Calderdale Council and chair of its education committee, while Philip chaired the planning committee.

Philip was stepfather to Simon and David, and grandfather to Nathan, Lisi, Seb, Lea, Ruby and Emily.