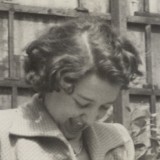 A former regional daily sub-editor who began her career replacing her future husband on her hometown newspaper has died aged 90.

Tributes have been paid to Rosemary Skinner, left, whose news gathering ability earned her the name ‘Scoop’ while working on the Penarth Times.

Born Rosemary Preece in Penarth, she joined the Times in 1944 to replace reporter Bob Skinner when he left for army service.

The pair first met when Bob called into the office on leave, and married in Penarth in 1952.

Rosemary later worked as a reporter on the Pontypridd Observer and for BBC Wales, as well as becoming a sub-editor on the South Wales Argus.

Bob, who described his wife as a “great journalist”, told the Times that Rosemary’s life had “come full circle.”

“She was born in Penarth in 1928, went to school and got married here. She took great happiness in spending her last 21 years living on the seafront back in her home town.”

Robert said: “Mum was a very good journalist, known on the Penarth Times as ‘Scoop Preece’ for her uncanny ability to find news.

“She had a natural gift for friendship, and was also a wonderful wife, mother, grandmother and great-grandmother.”