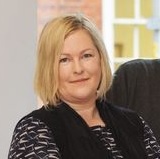 A former regional daily journalist has been made a trustee of a charity which runs one of the country’s biggest comedy festival.

Big Difference Company, the charity behind the Leicester Comedy Festival, has appointed ex-Leicester Mercury deputy business editor Lauren Mills to its board of trustees.

She previously held senior positions at a number of national newspapers including The Sunday Telegraph, Mail on Sunday and Wall Street Journal.

Said Lauren: “I am honoured to have been appointed a trustee of Big Difference Company as it celebrates its 25th anniversary.

“It is a charity which works tirelessly to change the lives of disadvantaged people from all walks of life.

“It also puts on the annual Leicester Comedy Festival, which brings millions of pounds to the Leicestershire economy and which includes many charitable events as part of the two-week programme.

“I look forward to working with the other trustees and the team at Big Difference to ensure it is in a position to continue its good work for at least another quarter century.”