An editor has hailed a triple sporting success for his patch after his newspaper marked a football club’s historic promotion.

The Lancashire Telegraph marked Accrington Stanley’s promotion to the third tier of English football for the first time in their history with print and online coverage, dedicating the back page to the team’s exploits after their new status was secured last night.

Rovers are themselves set for promotion from the third tier, while Burnley, who play in the Premier League, currently look likely to qualify for European football next season. 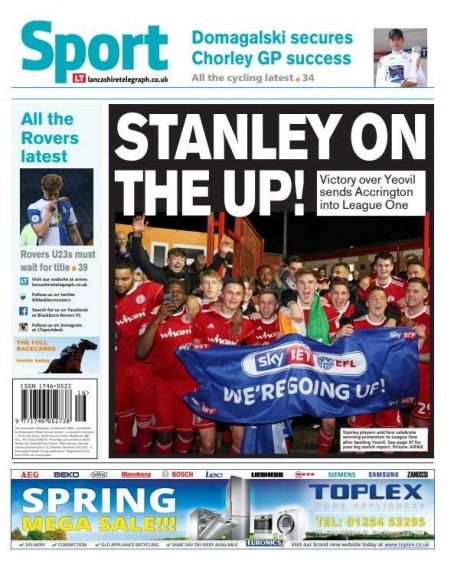 Meanwhile the Telegraph’s recently-launched Newsquest sister weekly the Burnley Star has splashed this week on Burnley’s success, and looks at what European qualification would mean for both the club and the town.

The Star, whose name is a “affectionate nod” to an evening title last published in 1983, was revived last month.

Of Accrington’s promotion, Telegraph editor Steve Thompson said: “This is a huge deal for the club and the town our sport team pulled out all the stops to cover the game.

“It’s an amazing achievement from Stanley to gain promotion on such a tight budget and it’s a great boost for the people of Accrington.

“All three East Lancs clubs – Accrington Stanley, Blackburn Rovers and Burnley – are enjoying success this season and all being well we’re looking at two promotions and a European tour.

“We’re reflecting that in our sport and news coverage of the patch, with the new Burnley Star tomorrow looking at what European qualification would mean to the club and the town.” 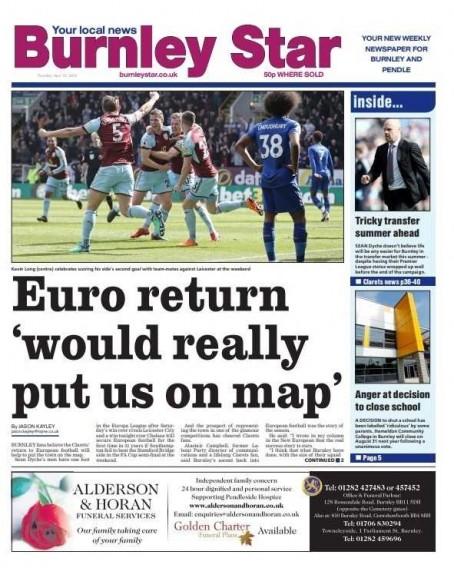