Dyson at Large: Get out of the office and meet people!

At a time when we’re increasingly battered by fluffy PR masquerading as news, social media scrapings and stretched data-journalism, it was heartening to find this succinct advice for would-be journalists.

This was just a snippet from my interview with Aasma Day, the Lancashire Post reporter who also leads Johnston Press’ investigations unit, published in the May-June edition of InPublishing.

Aasma’s full background, the detailed history of her award-winning journalism – which included a shortlisting in the Paul Foot Awards – and how the investigations unit works can all be read on the above link. 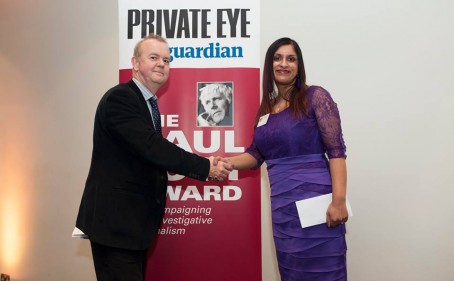 But it was her no-nonsense guidance on how to go about the job that most impressed me, and that I think is worth highlighting on my blog for HoldtheFrontPage readers.

First comes her warning not to be a ‘copy and paste monkey’. Too many modern reporters – themselves hit by increasing workloads caused by shrinking newsrooms – are too often tempted to simply regurgitate press releases, often without a check call, let alone challenging the story line.

Disclosure: I regularly create and send clients’ copy to journalists myself these days, and while I’d argue these stories are at least constructed with an eye for what makes news, the most satisfying results for me are when journalists make a call or send an email questioning the content.

Or even better, when they don’t even get in touch with me direct but decide on their own line having contacted another source, finding more and sometimes better detail to nose the story on.

Aasma’s second point – in summary – is to get out of the office and meet people. Talk to them, make them contacts, nurture them and gain their trust.

And rather than a long list of contacts who are actually public relations officers for companies and organisations, get to know the people who work on the inside instead.

Aasma’s so right. When was the last time a major exposure of ill deed was made via an official spokesperson? And how hard do all companies try to prevent their staff from ever speaking to the press without their say-so?

That element of control should never be enabled by journalists’ reliance on press offices, and yet that is now the state that some in the media have got themselves into.

Yes, of course it’s fair enough to call the council’s PR for a comment on controversial expenditures, to speak to a local football club’s press office for the official response to a player’s misdemeanour, and to ask a company what it wants to say over claimed negligence leading to, say, an injury.

But without inside contacts, none of the above types of story would ever be uncovered in the first place, and to get those inside contacts you need to meet eye-to-eye, sometimes after work and on neutral ground (yes, maybe in a bar, or certainly a cafe).

The same point from Aasma advises against over reliance on emails and social media. How can you judge the intent of the person behind what can so easily be anonymous emails?

The real story, or the extra kernel of interest for readers, is often only found by asking additional questions face-to-face, or by spotting something no-one else can see by meeting the person who’s posting their emotions.

People only become real contacts when you’ve looked them in the eyes and pressed their flesh … as opposed to a ‘friend’ on Facebook who, in many cases, might be furious their comments have been lifted without asking.

She knows that journalism is constantly changing, and she’s up for being multi-skilled – with all the digital story-telling abilities that means acquiring as reporters in 2018.

But while encouraging modern techniques, Aasma wants to impress the importance of using these with traditional methods – which brings us in a full circle to her initial advice on remaining independent and meeting real people.

Aasma’s direction is not necessarily new: any good journalism lecturer will be making the same points to their students up and down the UK, (and hopefully the editors and news editors that remain are doing so too).

But to find such sound advice on the frontline, from an emerging editorial leader of the future, and from someone who’s unafraid to speak in plain English, well … it was the most refreshing chat I’ve had with anyone still in journalism all year.

• Steve Dyson’s full interview with Aasma Day can be read at InPublishing.