There was double joy for a journalism training provider as it scooped two honours at last night’s NCTJ Awards for Excellence.

In the higher education categories, the University of Portsmouth was awarded for their undergraduate course and the award for the best performing postgraduate course went to Nottingham Trent University. 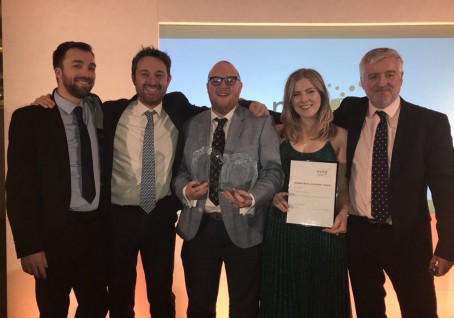 Staff of News Associates pictured after receiving their awards

The innovation of the year award, launched last year, was won by the University of Brighton for its Premier League Apprenticeship, which invited final year students to audition for six paid matchday media journalist roles at Brighton and Hove Albion FC for their inaugural Premier League debut.

All the winners received their prizes at a ceremony held yesterday evening at Quendon Hall, in Essex.

In 2017-18 242 students on accredited courses achieved the gold standard of A-C grades in all their diploma exams including shorthand at 100 words per minute.

Speaking at the ceremony, awards presenter Sarah Hewson, from Sky News, praised everyone who teaches on accredited courses for meeting the high standards set by the NCTJ on behalf of the industry.