A city daily has vowed to continue its fight against potholes after a new survey revealed the state of the roads are the biggest complaints for council services on its patch.

HTFP reported earlier this year how the Glasgow Evening Times had launched its Spothole campaign, which aims to tackle the problem in the city.

Now a survey carried out by Glasgow City Council has revealed just seven per cent of people are happy with the state of road maintenance.

The Evening Times splashed on the survey’s results yesterday, and has now pledged to keep up its campaign as winter brings “the return of bad weather”. 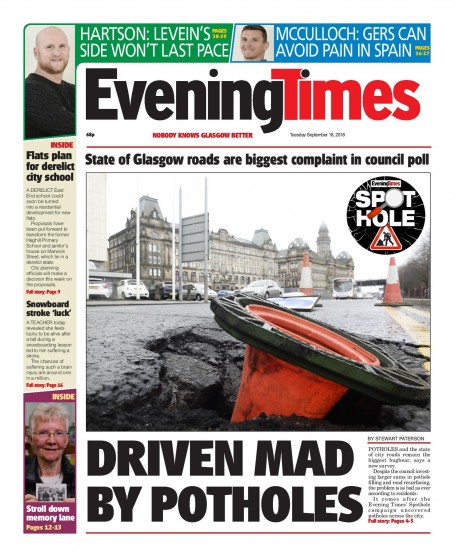 Evening Times news editor Deborah Anderson told HTFP: “We will be revisiting sites that were of issue during the campaign to see if the problems have returned.

“This report backed up why we launched the campaign in the first place as it is an issue which get under the skin of city drivers.

“We are always on the look out for pothole sites.”