The Burton Mail is set to defend its Newspaper of the Year Crown at this year’s Midlands Media Awards – but judges have admitted they hoped to see more titles entering for the prize.

The paper faces competition from the Birmingham Mail and its sister title the Sunday Mercury, as well as Wolverhampton-based daily the Express & Star and weekly publications the Hereford Times and Uttoxeter Advertiser.

This will be the 17th edition of the annual awards, organised by the Birmingham Press Club, with 16 categories up for grabs.

Applications from the West Midlands have dominated this year’s shortlist, and the winners will be announced in a ceremony to be held at Edgbaston Stadium, in Birmingham, on Friday 23 November. 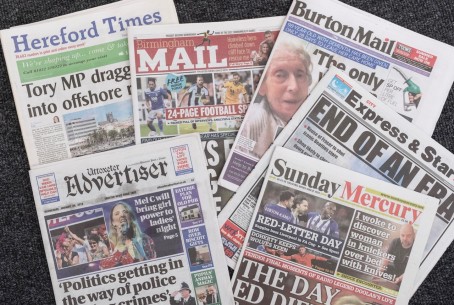 Laurie Upshon, head of the judging panel, said: “We were very impressed by both the volume and the quality of entries this year. In particular we were delighted to see strong competition in the newcomer category. Here entries came from all branches of the media and across the Midlands, making the selection for the shortlist very difficult.

“We were also pleased to see the difference starting to be made by the introduction of local democracy reporters in helping to scrutinise those in authority.”

He added: “The judges would have liked to have seen more entries for the Newspaper of the Year, but those we have nominated were of very high quality, showcasing regional journalism at its very best. In fact the range of entries across all categories emphasised the diversity of our region and the different issues affecting the lives of those in the villages, towns and cities in the Midlands.

“Finally, I would like to thank everyone who entered for the awards, and for their continuing support, and offer our congratulations to those who have made the shortlists.”

The President’s Award
To be announced on the night