A regional daily reminded football fans on its patch of their club’s “special” story ahead of a relegation crunch match last night.

The South Wales Evening Post’s front page yesterday urged Swansea City fans to remember the club’s “many recent triumphs” in a bid to help them back the side against Southampton.

It featured six ‘polaroids’ showing highlights of City’s time in the Premier League since their promotion in 2011.

Unfortunately for Swansea, they succumbed to a 1-0 defeat on the night, making them favourites to be relegated from the Premier League when the 2017-18 season draws to a close on Sunday. 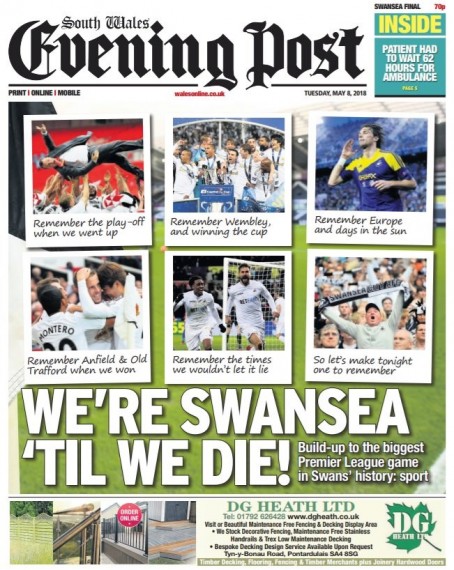 Editor Jonathan Roberts told HTFP yesterday: “Sadly, we are getting all too familiar with the need to rally our supporters behind the team for a relegation scrap. In previous years, our campaigns – ‘Back the Jacks’ and ‘#itcanbedone’ – have proved successful, encouraging a terrific group of supporters to focus their energy on the team, and they have always stepped up when it mattered most. There can’t be many 12th men as good as ours.

“This season has been a little different. We were all pretty much resigned to going down around Christmas time, before the new manager came in and appeared to have done enough to steer us away from trouble. Our recent loss of form and return to the bottom three is somewhat unexpected. So ahead of what is undoubtedly the biggest game of our Premier League era, we wanted a cover that would address any rising sense of panic on the terraces, and instead offer a little perspective.

“The Swansea City story is a special one, and we shouldn’t underestimate this club’s ability to win a battle. Hopefully today’s edition will remind fans of our many triumphs against the odds, and help to ignite the passion that has taken us to so many highs in recent years, ones we couldn’t possibly have dreamed of 15 years ago.

“The Liberty Stadium doesn’t need anyone nervously biting their fingernails tonight, just the clenched fists of the ‘Jack Army’, roaring their team on with confidence and pride. As we say in these parts – Swansea ’til we die.”