A regional daily has relaunched its campaign to get justice for a dead baby after a coroner ruled she was sexually assaulted by her father before her death.

The Mail, which is based in Barrow, wants an independent inquiry into Poppi Worthington’s death, an issue on which it has campaigned since 2016.

Recording a narrative verdict after a three-week inquest, Coroner David Roberts said Paul Worthington assaulted his daughter in his bed, then laid a cover over her and went to sleep before she died of asphyxia.

During a 2016 hearing, High Court family judge Mr Justice Peter Jackson ruled that Mr Worthington – on the balance of probabilities – “perpetrated a penetrative….assault” on Poppi prior to her death in December 2012. 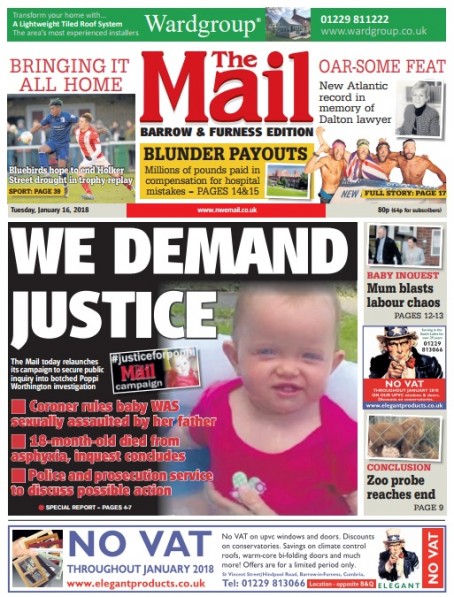 The Mail’s splash on its campaign relaunch yesterday

When the Mail launched its campaign, it ran the front page headline ‘Baby Rapist’ above a picture of Mr Worthington.

The 50-year-old, who denies any wrongdoing, had been arrested in August 2013 and questioned on suspicion of sexual assault but was not charged with any offence.

In the 2016 hearing, Mr Justice Jackson found that Cumbria Police conducted no “real” investigation into the child’s death for nine months, because senior detectives thought a pathologist “may have jumped to conclusions” in her belief the child had been a victim of abuse.

During the inquest at Kendal Coroner’s Court, Mr Worthington declined to answer 252 questions relating to the circumstances surrounding Poppi’s death.

Mail editor James Higgins told HTFP: “Our #justiceforpoppi campaign was launched two years ago and has never been far from the forefront of our minds. We are placing fresh focus on our demands in light of yesterday’s ruling.

“The verdict led to the inevitable platitudes from police chiefs, and while we do not doubt their sincerity, what we do question is whether the lessons which they say have been learned, have been – and furthermore whether that learning has been passed on to other forces.”

“Thousands of people signed a petition in which we called for an independent inquiry into Poppi’s death, and that call is also backed by senior community figures. Their voices must not go unheard.

“The government must immediately step up and order an independent inquiry into Poppi’s death, the police investigation – and whether anything could have been done in the first place to avoid it.

“So many elements of the way in which this matter has been dealt with has been flawed. Lessons must be learned, and the only way to achieve that is through a full and proper independent inquiry.”