A regional daily journalist has praised a rape victim after she opened up to him about her fight to get justice following the death of her son.

Helen Stockford appealed to the Bristol Post to share her story about the guilt she felt over her son Kyle, who was killed after he was run over during an alleged fuel theft.

Reporter Alex Wood says his interview with Ms Stockford, in which she blamed herself for reporting the rape because of the way it affected Kyle, will “probably stay with me for the rest of my career”. 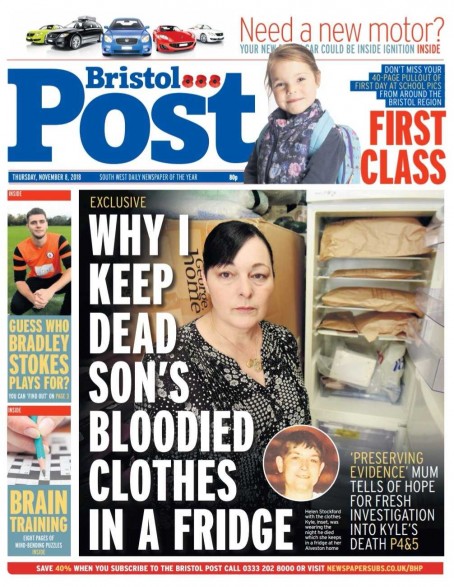 The Post splashed on the interview earlier this month, and the story went on to attract national media coverage.

Here, in his own words, Alex explains how he approached covering such a difficult subject, and shares his admiration for his interviewee.

Helen Stockford’s past is one that is scarred by both trauma and tragedy. In 2009, she was raped in her own home by a man who wanted to recreate a ritualised killing he had committed some years prior. She was saved by her son Kyle, who returned home early and disturbed his mum’s attacker.

Helen reported the incident to the police and gave evidence in court during a lengthy trial that resulted in her attacker being placed behind bars. We reported on this at the time, after Helen bravely waived her right to anonymity.

Fast forward eight years to January 2017 and Helen experienced yet another equally traumatic event – the death of her son Kyle, who was killed after he was run over during an alleged fuel theft in south Bristol.

The driver of the car that ran over him, Shakrul Islam, was later found guilty of manslaughter and jailed for seven years. But the conviction wasn’t enough for Helen and her family. She had questions about the night her son died and she said she felt let down by the police – and that’s why she decided to contact me.

Helen reached out in July of this year, and told me she would like to talk to us about her son’s death and the guilt she feels for what happened. Although we have reported previously on Helen’s attack, this was the first time she had openly talked about her rape in the context of her son’s death.

She said she blamed herself for reporting her rape in 2009, because of the way it affected her son Kyle and the impact it had on him. It was an interview that lasted more than an hour and a half and is one that will probably stay with me for the rest of my career.

Helen was so forthright, so open and so honest about everything, it almost took me by surprise. She knew what she wanted to say and she didn’t hold back. For that, I can only reiterate how humbled I was by Helen’s strength and determination, and her relentless drive to get the justice she says her son deserves.

After recording our interview with Helen, I realised we had so much information that it would be impossible to convey everything in a single article. That’s why we decided to split the interview into five separate pieces, all of which are available to read on the Bristol Live website. It was video-led, because I wanted the series to be told through Helen’s words, and I think this added to the general impact it had on readers.

The series was read by thousands of people and now ranks among the most-engaged articles on our site (readers read each piece in the series online for more than twice as long as any other story on our site). Some of the pieces were also picked up by the national press, with articles appearing in the Daily Mail, The Sun, Daily Mirror and Metro, which is great to see.

You should never go into a series like this thinking about hits but it was incredibly rewarding to see each piece in the series read so well, as well as make the front page of the Bristol Post newspaper.

I just hope that this provides Helen and her family with what they need to take their fight for justice forward.