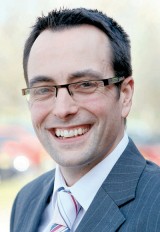 A regional daily editor has urged others to take advantage of free newsroom training sessions being offered by the press watchdog.

The sessions provide more information about IPSO, its complaints process and tips on how to resolve complaints.

IPSO trainers visiting regional newsrooms also explain key decisions and can also offer specialised training, focusing on particular Clauses of the Code or rulings that the publication thinks are interesting and relevant to their work.

Following a visit to the Star’s newsroom, Martin said: “Since IPSO was established, the way in which complaints are handled has changed comprehensively and our approach is now much more consistent and professional.

“However, the Editors’ Code, guidance from IPSO and indeed journalism itself is constantly evolving. To have the opportunity to ask questions of two senior figures from IPSO was extremely valuable and the feedback from those who attended was overwhelmingly positive.

“For IPSO to offer this sort of service to publishers – free of charge it should be noted – shows, I believe, the organisation’s commitment to raising journalistic standards.

“I would strongly recommend other publishers get in touch and take advantage of this excellent service.”