A council accused of providing “unfair competition” to an independent newspaper has praised the title as it marks its 10th anniversary.

Mayor of Hackney Philip Glanville has congratulated the Hackney Citizen on reaching the milestone, describing the monthly paper as a “vital part” of the borough’s media landscape.

Mr Glanville’s praise of the Citizen comes despite editor Keith Magnum’s repeated criticism of the council’s fortnightly Hackney Today newsletter, saying in 2016 that the selling of advertising in the publication constituted “unfair competition”.

HTFP reported in February this year how Keith further accused the authority of “starving independent local journalism of the revenue it needs to survive”. 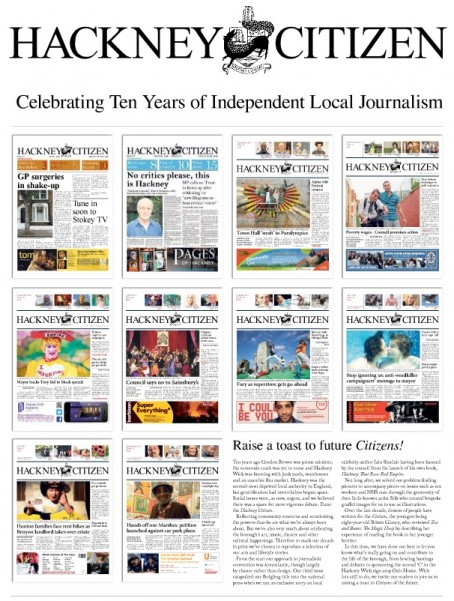 The council is currently considering taking the Ministry of Housing, Communities and Local Government to court over an order that the fortnightly Hackney Today reduce its publication frequency to no more than quarterly in accordance with national guidelines.

But, congratulating the Citizen on its 10th anniversary, Mr Glanville said: “Over the last ten years, the Citizen has become a vital part of Hackney’s media landscape. Local papers should have an important role in holding local politicians and institutions to account, but also in helping to connect local people with those institutions.

“The Hackney Citizen has always taken those responsibilities seriously, not just through its coverage of council issues, but through putting on hustings events at election time, and showing a keen interest in all aspects of local democracy.

“The Citizen also seeks to reflect what makes Hackney so special by championing and promoting the borough’s people, culture and businesses.

“This is a challenging time for news media, and I congratulate the Citizen for reaching its ten-year milestone. I hope it will go from strength to strength and look forward to the next ten years.”

Of the anniverary, Keith told HTFP: “A huge thanks to everyone who has helped and supported the Hackney Citizen and contributed to our paper over the last decade: journalists, designers, illustrators, newspaper deliverers, and our printers, Mortons.

“Local journalism is crucial in keeping people informed about what’s really going on around them. We’re proud to have survived and thrived in these commercially challenging times, and hope to keep doing so.”