A chief reporter paid tribute to his journalism mentor on the front page of the weekly newspaper where he works.

The Yellow Advertiser splashed on the death of Cliff White, who worked for magazines including NME, Smash Hits and Black Music over the course of his career.

Cliff, who was 72, also won the Grammy Award for ‘Best Album Notes’ in 1993, having become known in the 1980s for researching and writing in-depth album liner notes after moving into the music industry.

Charles Thomson, chief reporter at the Yellow Advertiser series, , which covers East London and parts of Essex, was a friend of Cliff’s, having first met him in 2008 during his journalism degree studies.

He published a comprehensive obituary on the Advertiser’s website, which went on to become the site’s most-read East London story throughout last week.

As a result, editor Mick Ferris decided to publish a shortened version of the obituary on the newspaper’s front page. 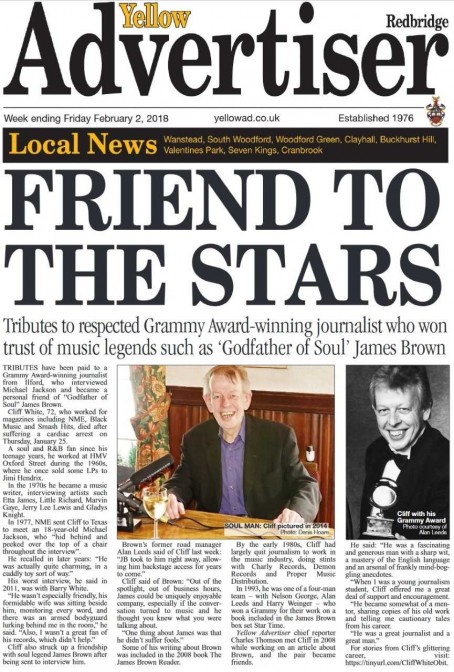 Charles said: “As soon as I heard Cliff had died, I knew I had to write something about him. He was a great mentor to me when I was a journalism student taking my first steps into the industry and he had such an incredible career. I couldn’t let him go unacknowledged.

“So much of our communication was through correspondence, as Cliff was a real lover of letter-writing – so I knew I had this cache of amazing stories and pieces of advice he’d sent me over the years. I spent all day on Saturday going back over our old conversations.

“The result was an interesting look at a media industry that doesn’t really exist anymore, and a music industry that doesn’t either. Magazines used to fly him halfway around the world for a 20-minute interview – and the calibre of artists he was meeting is astounding. So many of them are now considered all-time legends.

“It was lovely to see the story do so well online and then appear on the front page. Cliff deserves it. He was a really warm, generous man and a brilliant journalist.”