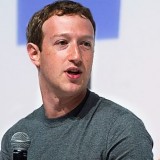 Facebook has moved to calm fears among newspaper publishers over changes to its news algorithms, saying it will give priority to stories from local media organisations on users’ feeds.

Mark Zuckerberg, left, has announced a series of updates for the social networking site which initially appeared to suggest that content from Facebook ‘pages’ would be downgraded in favour of posts from family and friends.

The changes, hailed by Mr Zuckerberg as part of a move towards more “meaningful social interactions” led a number of publishers to to set up new Facebook groups for reader conversations, to go alongside their official pages.

Announcing the move in a post on the site, he said he wasted to ensure Facebook “isn’t just fun but also good for your well-being and for society.”

He wrote: “We’re making a series of updates to show more high quality, trusted news. Last week we made an update to show more news from sources that are broadly trusted across our community. Today our next update is to promote news from local sources.

“People consistently tell us they want to see more local news on Facebook. Local news helps us understand the issues that matter in our communities and affect our lives.

“Research suggests that reading local news is directly correlated with civic engagement. People who know what’s happening around them are more likely to get involved and help make a difference.”

Mr Zuckerberg said the update would initially be introduced in the USA, before the policy expands into other countries later this year.

He added: “Local news helps build community — both on and offline. It’s an important part of making sure the time we all spend on Facebook is valuable. I’m looking forward to sharing more updates soon.”