A blue plaque honouring a former regional editor has been unveiled at the school where he first read the title he would go on to editor for 20 years.

The Yorkshire Society has erected the plaque to WR Mitchell, known as Bill, who worked on Dalesman magazine for 40 years.

Bill, who died in 2015 at the age of 87, edited the magazine from 1968 to 1988, having joined the title as assistant to founding editor Harry Scott following a stint as a junior reporter on the Craven Herald.

A prolific writer who penned more than 200 books, he also wrote for newspapers including the Yorkshire Post and Yorkshire Evening Post. 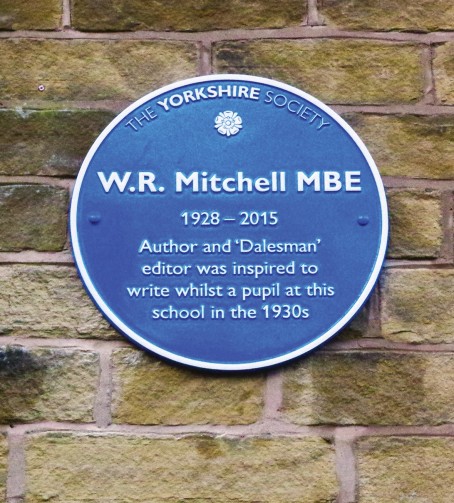 The plaque was installed at Skipton Parish Church of England Primary School, where a young Bill was shown the first copy of The Yorkshire Dalesman by an enthusiastic master in 1939.

It was unveiled by Yorkshire Dales-born BBC political correspondent Chris Mason, who described Bill as “an incredible Yorkshireman and journalist”.

Chris added: “To doff my reporter’s hat in Bill’s direction, at the school where my mum and dad met and where my dad spent his entire career is really, quite something.”

In a neat twist of fate, the children of current Dalesman editor Adrian Braddy both attend the same school.

The nomination for the Yorkshire Society blue plaque came from Bill’s son David, who said his father had dedicated himself to writing about Yorkshire for more than 60 years.

He added: “Yorkshire Television marked his retirement with a programme about his life, narrated by Alan Bennett. He received an MBE in 1996 and was made an honorary Doctor of Letters by the University of Bradford.

“There cannot be many parts of our great county that haven’t been touched by his magical presence, and my sister, and I are very proud of him.”