A bi-weekly’s front page story prompted its local MP to ask Theresa May to intervene on behalf of a bereaved family.

North West Norfolk MP Sir Henry Bellingham spoke at Prime Minister’s Questions this week, urging the government to look at the case of Ann Banyard after her family spoke of their anger in the Lynn News last Friday.

Mrs Banyard, who died last month, aged 70, was badly injured when she was knocked to the ground by a shoplifter fleeing from the Sainsbury’s store in the town centre in April 2015.

Her assailant, Aleksandrs Kukuskins, was subsequently jailed for two and a half years over the incident in May 2016 and a claim was submitted to the Criminal Injuries Compensation Authority soon afterwards. 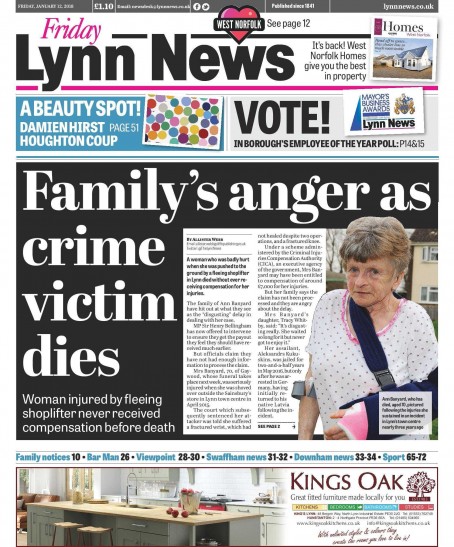 CICA claims the claim has yet to be processed because it has not received full information to enable it to consider the matter, but Sir Henry told the House of Commons that her family fears it may now “lapse completely”.

He asked Mrs May: “Will she join me and our local paper, the Lynn News, in supporting this case and will she make it clear that the rights of victims should always be at the heart of our criminal policy?”

In response, the PM offered condolences to Mrs Banyard’s family, but said the authority applied its rules independently of government.

However, she said the new Justice Secretary, David Gauke, would be prepared to meet Sir Henry to discuss the case, adding: “He’s absolutely right that we should always remember victims.”

Following the session, Mrs Banyard’s daughter, Tracy Whitby, said she was “encouraged” by the Commons exchange.

Lynn News editor Mark Leslie said: “Many thanks to Sir Henry for picking up on this subject. We have followed the case for the beginning. When my news editor Allister Webb spotted Ann’s name in our death notices we felt compelled to see how this sad story had concluded.

“It shows that a strong local paper standing up for the rights of its readers is still often the best way for vital issues to be highlighted to those in power.”