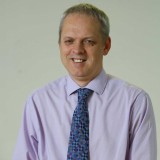 A daily newspaper editor axed in a restructure four months ago has taken on a new role as a council’s public relations chief.

Graeme Smith left Glasgow-daily The Herald in November along with Graham Shields, editor of Newsquest sister daily the Glasgow Evening Times, in a restructure which saw editor-in-chief Donald Martin given overall responsibility for the two titles.

Graeme, pictured, had spent 17 years with The Herald, and had edited the title for the final year of his service.

Now he has announced he is to become communications manager at East Renfrewshire Council from next month.

Said Graeme: “I’m absolutely delighted to get this role and am very muck looking forward to the next stage of my career.

“East Renfrewshire has a good reputation as a modern and ambitious council and I’m keen to help the team there further enhance its profile.

“I’ve lived in the area for 11 years so have had experience of their services. My three sons have gone to local schools and education is one of the council’s big strengths.

“It was a privilege to be editor of The Herald and I wish all its hard-working journalists the very best.”