An under-threat accident and emergency department appears to have been saved following a regional daily’s campaign.

The Huddersfield Daily Examiner has spent the past two years fighting to keep the unit at Huddersfield Royal Infirmary from closure.

The Examiner launched the campaign after NHS Clinical Commissioning Groups which run health services in the area, announced the plan, which it said would save £240m.

But now, Health Secretary Jeremy Hunt written to the Calderdale and Kirklees joint health scrutiny committee urging them to look again at the plans. 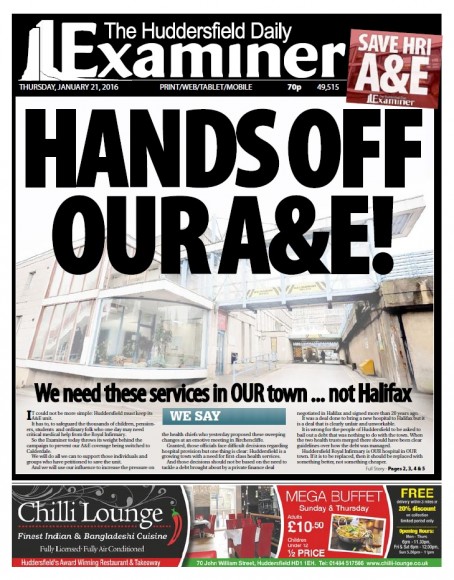 The Examiner launched its campaign in 2016

In his letter, Mr Hunt wrote: “In short, the proposals are not in the best interests of the people of Calderdale and Greater Huddersfield and I would ask the NHS locally and nationally to reconsider.”

Examiner editor Wayne Ankers told HTFP: “It is fantastic news. From day one of the announcement there was a huge public backlash resulting in a significant Examiner campaign to try and halt the plans.

“Despite not being editor at the time I recall seeing the Examiner Battle Bus which toured the town stopping off at key locations to raise the profile of the campaign, broadcasting live to the website.

“It now looks like the government is finally listening to the people of Huddersfield and I would like to congratulate every single campaigner who has put their effort into opposing the proposals.

“It is a good day for people power – and what a week for Huddersfield. Premier League football secured and it now looks like we could keep our hospital too. Let’s just hope these plans are kicked out for good.”