A regional daily doubled its web figures while pulling together a six-page special about a “shock” legal judgement affecting its patch.

The Gazette, Blackpool, splashed on what it described as a “moment in history” for Blackpool Football Club after Justice Marcus Smith ordered the team’s owners, the Oyston family, to buy out minority shareholder Valeri Belokon for £31.27m.

Blackpool supporters hope the decision means the Oystons will be forced to find a buyer for the club, after an ongoing battle between the family and fans in recent years over a perceived lack of investment.

Gazette journalists had also found themselves barred from more than one club event in recent years. 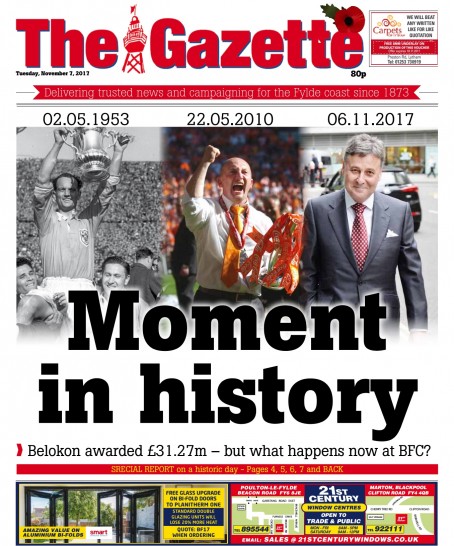 News of the judgement saw The Gazette’s online readership figures increase to double what they are normally, with the main story on Mr Belokon’s victory garnering 24,400 page views alone.

Deputy editor Andy Sykes said: “While many were expecting Valeri Belokon to win the case no Blackpool fan opposed to the running of the club would have dared dream of the outcome we saw on Monday.

“There was a palpable sense of shock at the amount the judge awarded to Belokon and we knew then we would need to clear a sizeable amount of space in the paper to do it justice – and explain what may happen now. Sports reporter Matt Scrafton did a marvellous job with a live blog throughout the day.

“The hits online around the time of the verdict were up there with the audience we last saw during the Cryptosporidium water scare in 2015. The shocks kept coming throughout the afternoon – the judge blocking a possible appeal, ordering them to pay £10m within 28 days, accusing them of illegitimately stripping the club of funds.

“But Matt handled it beautifully and coupled with some great design work by Andy Williams, we have produced six great pages of the court hearing, analysis, views of fans, what the future holds now and some of the most explosive elements of the 163-page court judgement.

“(Footballer and media pundit) Joey Barton has now indicated he has instructed lawyers to look into retrieving the cash he paid the Oystons in an out-of-court settlement when he called them asset strippers – so this story is going to run and run.”

The Gazette’s front page yesterday depicted the decision as ranking alongside Blackpool’s 1953 FA Cup final win and promotion to the Premier League in 2010.

Andy added: “This was a moment in the town’s history and I hope we have done it justice.”