Students have been presented with bursaries given out annually in a bid to increase diversity in journalism.

Three Journalism Diversity Fund recipients were presented with grants at a ceremony held in London yesterday.

The fun is administered by the National Council for the Training of Journalists, and is aimed at ensuring diversity is at the top of the agenda throughout the journalism industry.

Connor Parker, of the University of Sheffield, and Rory Claydon, of Cardiff University, were both awarded the Thomas Read bursary, which is given each year to a Journalism Diversity Fund recipient who has a long-term illness, health problem or disability. 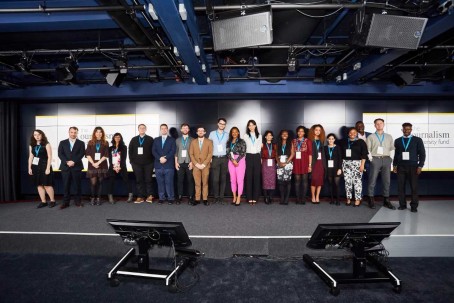 Attendees at the JDF event

The bursary was set up in the memory of the Sky Sports News journalist Thomas Read, who had cerebral palsy and died unexpectedly in 2015, aged 25.

Speaking at the event, Thomas’ father Kevin Read said: “Two years ago, our initial aim was to raise £15,000 and award three bursaries to young journalists. Now, having already raised £30,000, we want to reach £50,000 and award ten bursaries.”

Also presented at the event was the Claire Prosser bursary, which is designed to help people from all walks of life into broadcast and digital careers, and was set up in the memory of founder and former director of the BBC Journalism Trainee Scheme, who died suddenly in 2014.

This year’s bursary recipient, Shamaan Freeman-Powell, was presented with her award by Paul and Ellen Clabburn, Claire’s husband and daughter.

Addressing the audience, Ellen said they were particularly impressed with Shamaan’s digital showreel, part of which showed Shamaan standing in Storm Doris to demonstrate her exemplary determination and work ethic.