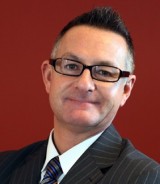 A managing director who left a regional publisher as part of a management shake-up this summer has a new job with a Midlands-based brand agency.

David Simms, left, who served as MD for Trinity Mirror East Midlands until August, has taken on the role of group sales director for Champions (UK), based near Loughborough.

David departed TM along with Richard Duxbury and Michelle Gesell in a move which saw the company’s remaining regional MDs take on responsibility for larger regions.

The East and West Midlands regions, for which David and Michelle were responsible respectively, have been merged with the Avon area of the company’s South-West operation to be overseen by Sarah Pullen.

Since taking up his new role, David has already secured a partnership with The Magazine Sales House (MHS) to expand their reach of advertisers.

* Ryan Tute has been appointed as a reporter at construction industry magazine and website, Infrastructure Intelligence. He has previously worked as a reporter at the Hackney & Islington Gazettes, Romford Recorder, Blackpool Gazette and Dundee Evening Telegraph.

* Ryan Cryle has moved from the role of deputy chief sub-editor at the Aberdeen Evening Express to become head of sport at the DC Thomson title.

* Charlene McElhinney has been appointed to the role of lifestyle editor at the Strathclyde Telegraph.

* Suzanne Breen has been made political editor of the Belfast Telegraph.  She was previously senior Northern correspondent for the Irish Times and northern editor at the Sunday Tribune.

* William Mata has become chief reporter at the Times of Tunbridge Wells, replacing Adam Hignett who left last month.  William has previously worked as a reporter at the Harlow Star and Stroud News & Journal.