Journalists have been recognised for their work in highlighting domestic violence issues.

The Write to End Violence Against Women Awards were held on Thursday at the Scottish Parliament, in Edinburgh.

The Daily Record’s Annie Brown received the Best Article – News prize for a story about rape victims on Scotland’s northern islands being forced to travel to the mainland for forensic examinations due to a lack of facilities, while the Sunday Herald’s Vicky Allan won the Best Article – Feature award.

It was the fifth year the awards, organised by charity Zero Tolerance, have been presented. 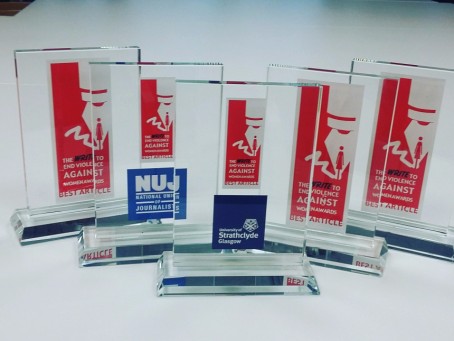 Best Article – Feature
Vicky Allan, Sunday Herald – Domestic abuse: This article will upset you but it is vital that you read it

Best Article – Student and Young Person
Polly Smythe and Niamh Anderson, The Student – Domestic abuse is happening at university. So why don’t we talk about it?