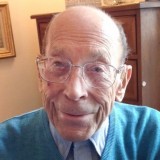 An international journalist who began and ended his career at the same regional daily has died aged 88.

Alan Syer’s spells at the East Anglian Daily Times sandwiched a career in which he worked in South Africa, Zambia and Zimbabwe, as well as New York.

Alan, left, first worked on the Ipswich-based EADT as a reporter in the early 1940s before being called up for National Service, returning to the newspaper in 1949.

In 1951, at the age of 23, he took up a job in Africa and worked his way up to become editor of the Argus Africa News Service in Johannesburg.

He had secondments to the Argus Group’s London and New York bureaux, and an 1970 became its North American manager and editor in 1970.

Alan returned to the UK in 1978, and spent the remainder of his working life back on the EADT as a sub-editor, chiefly responsible for the editing and layout of the business pages.

He retired at the age of 65, and was a keen chess player away from work who also volunteered with Colchester’s mobile library service.

His funeral service was held at Colchester Crematorium on 16 November, and was attended by family and friends.