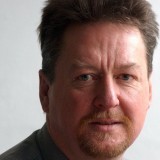 Ex-editors have paid tribute to a former regional daily journalist who has died suddenly aged 61.

Dave Black, left, worked for Newcastle-based dailies The Chronicle and The Journal for 27 years before leaving in 2013.

He died at home in the early hours on Sunday morning after spending the previous day watching the Super League Grand Final.

Dave initially worked for the Northumberland Gazette before moving to The Journal in 1986, where he was based in its Bedlington and Newbiggin offices.

Paul Robertson, who edited The Chronicle and the Teesside Gazette, posted on Twitter: “Shocked and saddened to learn that one of the best reporters I ever worked with Dave Black passed away suddenly last night aged 61.”

Former Journal editor Brain Aitken added: “So so sad. A great reporter gone much too soon.”

The Journal’s business editor and former news editor Graeme Whitfield described Dave as one of the best reporters he has worked with.

“When I came to be news editor of The Journal, I came to rely on Dave for his professionalism and good humour. Not much happened in Northumberland without Dave knowing about it and getting it in the paper the next day,” he said.

Journal print publishing editor Richard Kirkman, who was Dave’s news editor on the paper from 1999 to 2001, added: “Dave knew his patch like the back of his hand and his many, many contacts knew and trusted him.

“He was a news editor’s dream: his copy was always clean and every angle of the story was covered. It’s a huge shock to hear of his early death and our hearts go out to his family.”

Dave, who lived in the Northumberland town of Alnwick for more than 30 years, is survived by Linda, his wife of 34 years, daughter Cassie, 29, son Robbie, 32, and step-daughter Donna Anderson.

Outside of journalism, he was an avid Newcastle United supporter and enjoyed walking with his Linda in the years after he finished work.

Said Linda: “I loved him so much and we were never apart. He was easy to talk to and he got on with everybody. I’m really going to miss him and I honestly don’t know what I’m going to do without him.”

Added Robbie: “He loved his sport. Watching the rugby and being with his family, that is how he would have liked to spend his last day.”