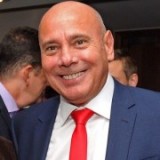 A former regional publishing boss has taken up a new role as chief executive of a public affairs firm.

Steve Anderson-Dixon, who was chief operating officer at Trinity Mirror, is now working as CEO for JBP, which has clients including the UK Vaping Industry Association and the All-Party Parliamentary Groups on Engineering.

Steve, left, takes over from founder Jennifer Bryant Pearson, who moves to a new role focusing on “client development”.

He left Trinity Mirror in November last year after five years with the company and a 40-year regional press career.

Steve has served on the board of JBP since 2012.

Ms Pearson said: “We have set some very ambitious growth targets and Steve’s appointment, together with my new role, will allow us to focus both on new business projects as well as developing ever stronger relationships with our existing clients and networks.

“He will have a key role to play in developing our ambitious business strategy.”